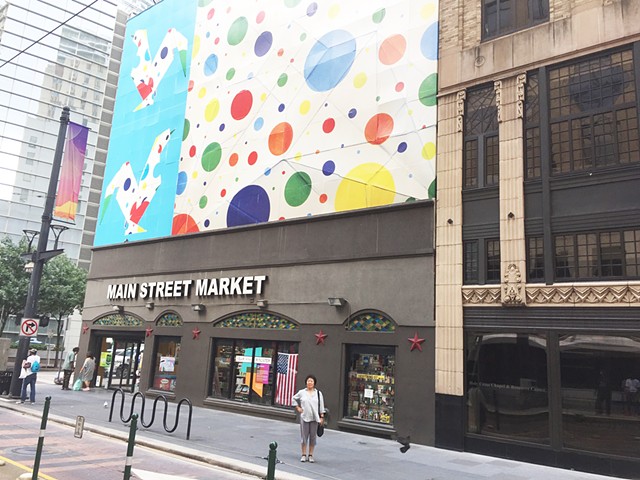 My name is Chun Hui Pak. I came from Korea to the United States, and I enjoy both my new homeland and my Asian Heritage. I currently have my studio in Vancouver, Washington. I’m a former ArtServe Michigan grant recipient and recent ArtBlocks Houston art competition winner. My twin passions are my love of painting abstract artworks and my long and continuing interest in the ancient Asian paper-folding art of origami. My artworks often seek to explore the synergies of interpreting origami fold structures as oil on canvas paintings.

For the ArtBlocks Houston Marquee Banner Competition, I created folded and unfolded interpretations of the Chinese Zodiac Rooster fold. Since 2017 was the Year of the Rooster, I created this origami Rooster mural to pay homage to the large population of Asian-Americans that inhabit Houston and its surrounds. The resulting 40 feet high by 60 feet wide mural is shown above with the artist standing beneath it. The mural was installed in downtown Houston's Market Square in June 2017 and remained on display and survived unscathed during hurricane Harvey until taken down in March 2018.